Over the past 27 years, I've experienced unbelievable change. Some of it was good; some of it, well, while not easy, it was necessary.

It has sometimes felt as if it is impossible to keep up. But I always pushed through because I knew to succeed, that's what I had to do. So today, I want to share my POV on WordPress's upcoming Full Site Editing (FSE) and how that may impact your website.

Full Site Editing (or “FSE”) is a collection of interrelated features that unlocks the ability to edit your entire site using blocks. This allows you to take advantage of the familiar and flexible experience of the Block Editor in more places.
WordPress.com

Here's a great article from one of my hosting partners, Kinsta, about what's new in WordPress 6.0. With this release, it behooves you to review your website and current theme to make sure you can take advantage of these new advances.

You've probably heard of builders and editor plugins (Elementor *, Beaver Builder, WPBakery). I'm not a fan of most editors, but many developers are. That's okay — everyone has a way of doing things that work for them. Rather than rehash that now, you can review my previous post where I talk about “builders.”

TL;DR: Builders allow website owners to customize their sites further above and beyond what any theme can do on its own. Without knowing the code. Similarly, developers love the ability to customize websites in a way they couldn't before regarding layout, element positioning, and customization.

The downside is that with that design freedom and flexibility came website performance and ease of use issues. Sites were slower, and website owners were frustrated with the non-intuitive user interfaces and shortcodes that made swapping out to a new theme more difficult.

While at first, I was not a fan of Gutenberg, I dove in and loved it. You can add a block to any page to get the layout and design you prefer within the constraints of the theme you have in place.

Yes, it has taken some time to work out the kinks and tweak functionality and usability. But that's what happens with anything new once released into the wild. If the product or software doesn't evolve — then that's when you need to worry.

For non-techies, you now have more control than you ever have without knowing code. Some stayed with the “Classic Editor” that kept things as they were for those not ready to switch to using blocks.

That was years ago. If you are still using the Classic Editor, move to Gutenberg. Deactivate the Classic Editor plugin, go to any page or post and use the Convert to Blocks option. You can then tweak it to your liking and probably be pleasantly surprised at how easy it is.

WordPress 5.9, released in January/2022, put block-based themes at the head of the line. FSE is now firmly in the mix. This means that themes will eventually be FSE (block) compatible. Don't worry; this has been in the works and is not an on-off switch. Yet.

But with significant changes come choices that have to be made. So for this discussion, let's talk about themes.

What about your current WordPress theme?

Anyone who has worked with me knows I've been a fan of StudioPress from its inception. However, I've felt for some time now that StudioPress has not kept up with the latest developments, and their growth as far as new themes have stagnated.

I knew I would probably not move to another StudioPress theme unless they stepped up their game when I made the next switch. So my radar was on.

Some have migrated to builders and feature-rich “builder” themes like Avada and Divi *. Divi has made significant performance gains and is a viable solution for strident DIYers. However, Avada still has a steep learning curve, and I'm not impressed with its performance metrics.

This website is currently Kadence. I chose this theme because it is lightweight, feature-rich, and takes advantage of block-level editing. Read about that here.

My Radar On; Discovery!

When the “World Wide Web” was created, then WordPress, then Revolution — which morphed into StudioPress and the Genesis framework — I had a gut feeling for each that led me to jump in.

For the first time in a long time, I had that same gut feeling again—this time with a new block theme called Kadence. At first glance, it seemed to check all the boxes I had been waiting for.

So I did what I always do. I dove in—redesigned two of my sites, [email protected] and BusinessEmailEtiquette.com. Not only did my performance metrics go up a notch immediately, but it was also fun.

At the same time, it became glaringly evident how far behind Genesis/StudioPress had become. More than I had realized.

Change is inevitable regarding websites, technology, and even life. That's because good companies and products look for ways to ensure that their products keep up. Or, better yet, they are ahead of the curve. So they take advantage of the “now” and what they envision the future will be.

StudioPress did that and announced that they would be archiving all but ten of their child themes to prepare for Full Site Editing support with Genesis block products. That was over a year ago.

So if you are on a StudioPress child theme, you have a decision to make.

Decisions Made Sooner Than Later

Technology will keep trucking along — with or without you. This concept applies to other WordPress themes as well. I only mentioned Genesis StudioPress because I used and recommended them for a very long time.

However, I smelled an opportunity to jump on the FSE bandwagon before everyone else did, and it is yesterday's news. But, then again, that's always how I've rolled — ahead of the curve.

If you are on a third-party Genesis child theme, you'll want to check with that developer to see what their plans are moving forward. Are they updating, archiving, or ?.

In the case of one of my favorite StudioPress theme shops, Restored 316, I was pleased to find out that they are not only updating their most popular Genesis child themes but are now making themes for Kadence * too. (Great minds think alike?)

What does that mean for you?

At the same time, the lack of progress over the last couple of years from StudioPress caused me to look elsewhere. (I'm not alone either, as I have seen rumblings about StudioPress in other groups I frequent.) And when I did, I discovered a block theme that, in my view, blew StudioPress out of the water called Kadence.

Here's what you have to consider:

Regardless of what WordPress theme you are on, you want to check with the theme developer to find out how they will be addressing WordPress with Full Site Editing.

Now is the Time for Action

I usually don't advise folks to make a switch just because I have. I quite often tend to be ahead of my time. Usually, website owners have more than enough time to stay in their safe space until they can make the necessary decisions.

However, in this case, this is a situation I recommend that you have on your radar, think about, and plan accordingly. Especially considering WordPress 6.0 will be out this week.

The last thing you want is to have a site that isn't up to speed (literally), isn't using the latest technology (you're left behind), or ends up breaking with a future update (Ouch!). All of which can be avoided by taking action now.

P.S. Do yourself a favor and check out Kadence.

WHAT I'M WRITING ABOUT 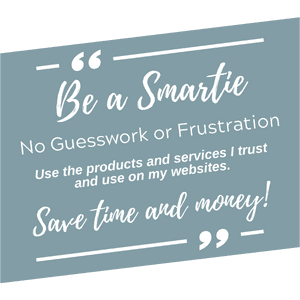